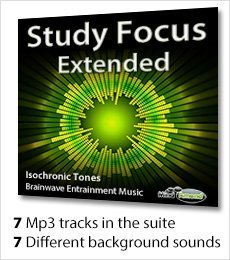 A Study Aid For Those Longer Study Sessions

If you struggle to concentrate and stay focused while studying, especially when you are reading, studying or working for longer time periods, these tracks are for you.

The extended version includes the usual variety of 6 soundtracks, plus a ‘just tones' version without any music.  Because it was so popular in the shorter version, I've included a 3 hour version of ‘Pulsating Synth', but the other 5 soundtracks are different from the original.

Amplitude Entrainment Effects in The Music

This extra layer of brainwave entrainment stimulation adds to the overall effect and helps to increase the power of the track.

To find out more and listen to demo samples of the new soundtracks, go here >